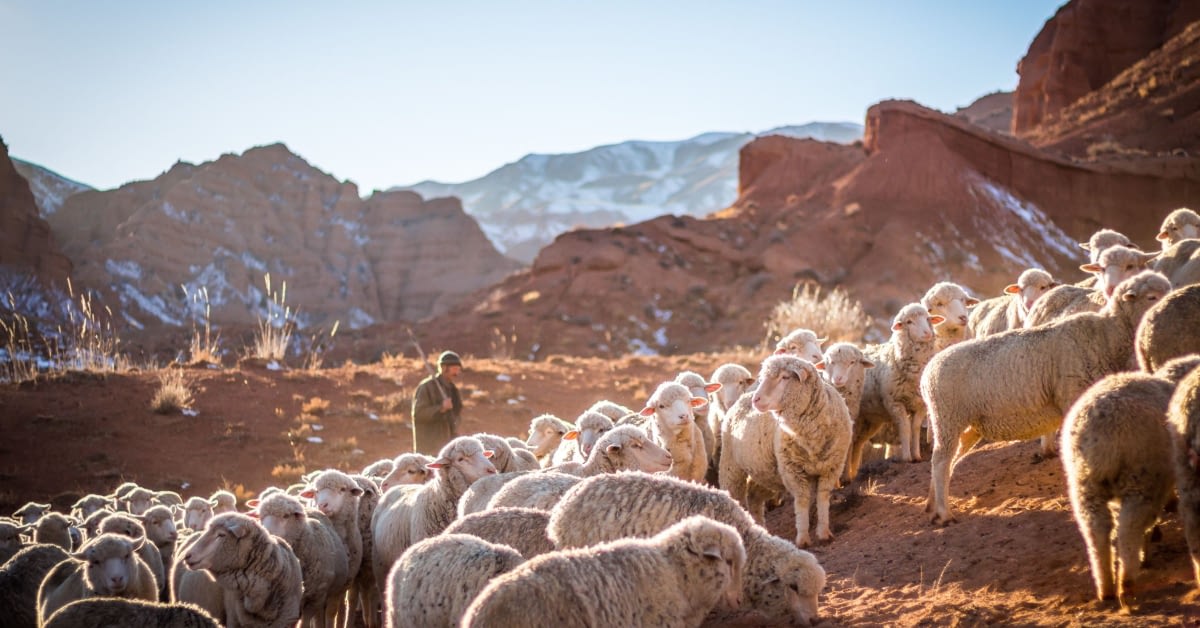 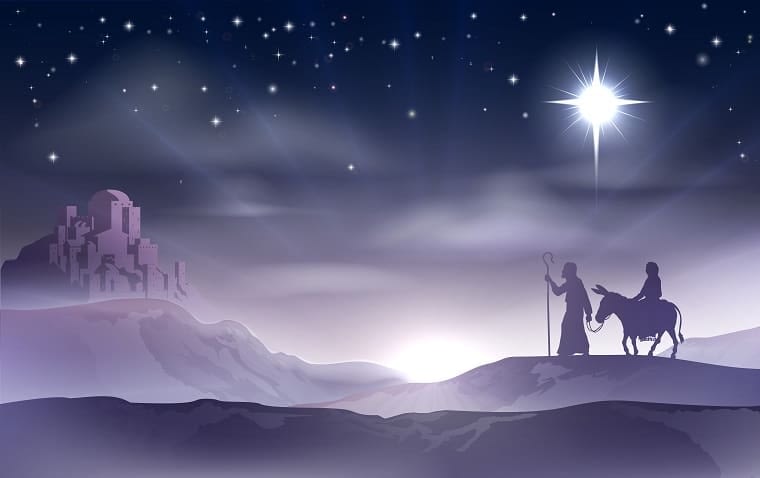 I need to sleep, but I can’t. It’s quiet now. Joseph is out getting more fuel for the fire. Jesus is sleeping peacefully beside me. I’m exhausted but I don’t want to sleep. So many wonderful things have happened today, I want to soak it all in. I don’t want this moment to end.

I didn’t feel this way two days ago. When Joseph and I arrived in Bethlehem, all I wanted was for this pregnancy to be over. The six-day journey from Nazareth wasn’t bad, as journeys go. We were fortunate that a kind traveler in our caravan offered to let me ride on his donkey. It was better than walking, but there really isn’t anything enjoyable about riding a donkey 12 hours a day. Each step was a jostling reminder that the new life within me would soon want out.

I didn’t know what to expect in Bethlehem. Would things be different? From the moment Gabriel visited me 9 months ago, little in my life has gone as expected.

I was engaged to Joseph, and dreamed we’d have a perfect wedding and then begin our family. That all changed when God chose me to be the mother of our Lord. Every Jewish girl dreams about being the mother of the Messiah. But who thought it meant a miraculous pregnancy?

Gabriel said my cousin Elizabeth was also pregnant because of God’s blessing so I went to see her right away. She was such an encouragement. God’s Spirit told her about my supernatural pregnancy so I didn’t have to hide anything. We laughed and cried, shared our hopes and dreams and also our fears. She helped me find the strength of God to face the coming months. And I would need it.

I returned from my visit with Elizabeth and immediately told Joseph everything. I could see the hurt in his eyes, that he didn’t believe me. Who could blame him? In all the history of humanity, who has ever gotten pregnant without having sexual relations? Joseph stood, turned away and paused. Then he tearfully said that he was going to divorce me. He would do it quietly to try not to shame me.

He left me heartbroken. I expected him to believe me. He had to believe me! If Joseph didn’t believe me, who would? I prayed, crying myself to sleep asking God to change Joseph’s mind.

I didn’t expect to see Joseph again, but I did. He came to see me early the next morning. He had a dream and an angel told him that everything I said was true. Tenderly he said, “I believe you Mary. I won’t divorce you. We’re in this together.” Oh how I love Joseph!

Since then he has been so kind and tender. We’ve talked for hours about this. We’re both thrilled and afraid. It’s wonderful to think about being the parents of the Messiah, but we really don’t know what to expect.

We were married and it was a joyous day. But there’s something about being pregnant when you get married that makes it less than perfect. The wedding was beautiful but Joseph and I have not yet consummated our marriage.

We expected the baby would be born in Nazareth, where my family would be there to help. That didn’t work out. The Romans ordered a census, so we had to travel to Bethlehem to register for it. We delayed our trip as long as possible, hoping the baby would come first, but he didn’t. Then our prayers were that we would make it to Bethlehem before he was born.

The first challenge was to find a place to stay. So many people had come to register for the census that everywhere we looked was full. Finally, a family had pity on us, seeing that I was with child, and let us stay in their barn. It wasn’t ideal, but it was an enclosed room and the heat from the animals would keep us warm. We’re used to bringing our animals inside at night, so it wasn’t a problem.

Joseph immediately went to work and fashioned a bed for us. Ladies, if you don’t have a husband yet, I recommend marrying a carpenter. We got settled in and almost immediately I started having contractions. I’ve been with friends when they had babies, so I knew it was time. We didn’t have any relatives in Bethlehem so Joseph found a midwife who would help.

When she arrived you would have thought the whole town came with her! She shuffled in with enough helpers to deliver 10 babies! There were even more people outside, peering in. The solitude of the barn gave way to joyful bustling and conversation. I struggled with contractions but couldn’t help smile as I felt joy surround me! Who isn’t happy to hear a baby is coming?

Well, I’ll tell you who. My family and neighbors in Nazareth, that’s who. No one in Bethlehem knew us. We were just a young couple having our first baby. This was so different from what we would have experienced back home. There most people looked down on us because they thought Joseph and I slept together before we were married. Worse yet, some thought I got pregnant from someone else. Even though the truth was more wonderful than anyone could ever know, the sneers and disapproving looks still hurt.

Since there are men in the room right now, I won’t share all the details of the next few hours. Ladies, see me later and we’ll talk more.

The midwife, whose command of the situation equaled that of any general with his troops, said “Shh! Shh! Just wait. First, someone get Joseph,” she said.

She cleaned the baby up, wrapped him tightly with strips of cloths and handed him to me. Oh, He is the most beautiful baby boy one could ever imagine. I looked at him and softly wept tears of joy. I looked at Joseph. “Do you want to hold him?” I asked. He was tentative, but with a little help from the midwife figured out how to hold him. He looked so tiny in Joseph’s huge arms.

The midwife asked, “What’s his name?”

“That’s a wonderful name,” she said. “How did you come to choose it?”

His name spread through the crowd, “His name is Jesus. The baby’s name is Jesus!” There were many congratulations then slowly the crowd went away. Finally it was just Joseph, me, Jesus and the midwife.

“You are so blessed,” she said. “Enjoy this time. From this moment on your life will never be the same,” and she left. Little did she know how right she was!

Joseph and I lay side-by-side, holding Jesus. Here he was. The miracle had happened. We gazed at him and each other and smiled, so glad to be able to enjoy this moment. Joseph picked up Jesus, who was quietly sleeping, and laid him in a manger filled with straw. He came back to bed and we dozed off to sleep.

It seemed like only a few minutes later we were startled awake because of a commotion at the door.

Someone was pounding on the door and shouting, “Is this where the new baby is? Is this where a baby boy was born this evening?”

Joseph opened the door and said, “Yes it is. Lower your voices, you’re going to wake the whole town. Who are you? What do you want?” Joseph asked.

“We’re shepherds and I know this is going to sound crazy, but we were out in the field watching our sheep and we were visited by an angel. Yes, an angel! And no we haven’t been drinking. Well, we did have a little bit to drink but not that much. The angel told us about your baby, didn’t he?” he said turning to his friends standing with him. They all nodded. “Yes, that’s right,” they all said.

“Why do you think he was talking about our baby?” Joseph asked.

“The angel said a baby was born tonight in Bethlehem. We looked all over town and yours is the only baby boy born tonight. Not only that,” he said pointing in the room at Jesus, “the angel said we would find him wrapped snugly into strips of cloth and lying in a manger. Look, there he is just as the angel said! Can we come in and see him?” he asked.

Joseph turned to me and I smiled and nodded yes. They came in and surrounded the manger. They smiled, jostled each other and said, “What do you know? The Lord! The Messiah!”

Joseph said, “Why do you say that? Tell us more about what happened with the angel?”

“Sure,” the shepherd said. “We were out in the fields watching our sheep when an angel appeared to us. As you can imagine we were pretty scared. The angel must’ve known because his first words were ‘Don’t be afraid!’ Then he said, ‘I bring you good news that will bring great joy to all people. The Savior-yes, the Messiah, the Lord has been born today in Bethlehem, the city of David!”

“Then he told us how to find you. He said, ‘and you will recognize him by this sign: you will find a baby wrapped snugly in strips of cloth, lying in a manger.’ It was incredible. Nothing like this had ever happened to any of us. Then one more thing happened. Suddenly, the angel was joined by a vast host of others-the armies of heaven-praising God and saying, ‘Glory to God in the highest heaven, and peace on earth to those with whom God is pleased.'”

“Then the angels disappeared just as quickly as they came. We looked at each other and said, ‘Let’s go to Bethlehem! Let’s see this thing that has happened, which the Lord has told us about.'”

“That’s it. That’s what happened. We’re so excited that God chose lowly people like us, shepherds, to tell about the birth of the Savior. You folks must be really special that God chose you to be the parents of the Messiah,” he said.

They sat down and we talked a while. We told them our story, how we were chosen, too. We told them how we were both also visited by angels and how it was we came to be in Bethlehem. Soon the baby began to stir and I knew it was time to feed him. The shepherds thanked us for letting them see the baby Jesus and left.

The past few hours have been like a whirlwind! When we left Nazareth, I thought it might be just Joseph and me in a tent when Jesus was born. I will always treasure the memory of this night. I’m glad it wasn’t what I expected.”

Mary’s Christmas Story [As I Imagine She Would Tell It]

Mary’s Christmas Story [As I Imagine She Would Tell It] 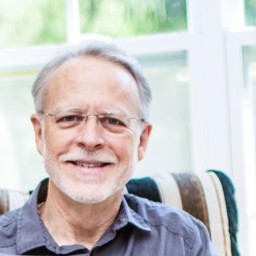 My journey of faith started when I was nine years old when I realized that Jesus died and rose again to pay for my sins. At the age of thirteen I felt the call of God on my life for ministry. I have been fortunate to work in the marketplace for over ten years and in full-time Christian ministry for over thirty years. My passion is to teach God's Word in such a way that it is easy to understand and so that God uses it to bring about life change in those who hear it. It is my greatest joy to see God work through me to produce fruit for His glory!